The Churches of Siena 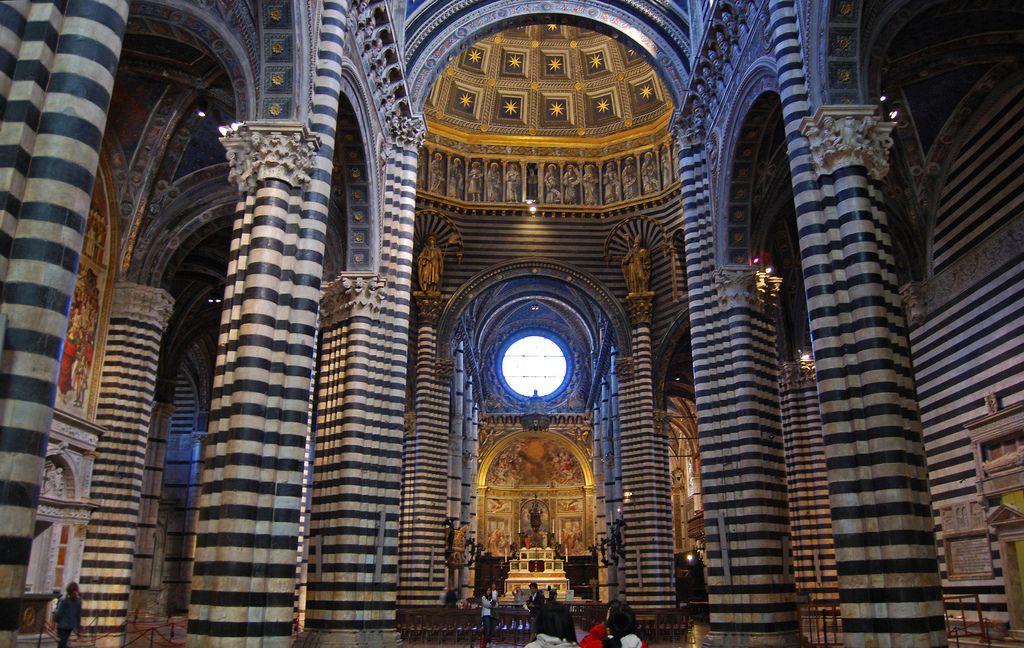 The Churches of Siena

Basilica of San Domenico di San Domenico - The history of the Basilica is linked to the figure of Saint Catherine of Siena.

For its size, for its position on the hill of Camporegio from which it "dialogues" permanently with the Duomo, for the collection of works of art it contains (four above all: the Maestà by Guido da Siena, the fresco by Andrea Vanni which depicts Saint Catherine, his only true portrait made in life: the cycle of frescoes by Sodoma in the Chapel of Saint Catherine which contains the reliquary with the head of the Saint, the Adoration of the shepherds by Francesco di Giorgio Martini), and for being the main place of religious life of the Sienese Saint. The construction lasted over two centuries (from 1226 to 1465). The basilica has a severe and massive appearance in its brick architecture, with an anomalous façade, smooth and without decorations. In the large fourteenth-century crypt, with three naves, a large cross painted by Sano di Pietro. Just below the Basilica, taking the Costa del Serpe, a somewhat hidden road that goes down under the hill, you arrive at the Fonti di Fontebranda. Very beautiful is the view of the back side of the church (transept and terminal chapels), which can be enjoyed from the hill opposite to that in which the basilica stands, especially from via di Diacceto.

Basilica of San Francesco - Here the "sacred particles" are kept.

The history of the Basilica of San Francesco is one of the most troubled in the city. The first church dates back to 1228, just two years after the death of the saint to whom it is entitled. A century later, in 1326, the current project began, a “factory” that did not cease to operate until the beginning of the 20th century: after another century it was entrusted to one of the great Sienese artists, Francesco di Giorgio Martini, the project to enlarge the church and build a beautiful portal, which today is no longer on the facade, but inside. Destroyed by fire in 1655, rebuilt in purist style by Giuseppe Partini between 1885 and 1892, brought to a definitive false Gothic appearance in 1913, the Basilica of San Francesco has since found its "peace" and hosts a formidable collection of works of art of the Sienese school, including the Coronation of the Virgin, begun by Sassetta in 1447 and completed by Sano di Pietro in 1450, the Nativity of Christ by Sodom, two frescoes by Ambrogio Lorenzetti, the Crucifixion by Pietro Lorenzetti. The Basilica also preserves the "sacred particles": on 14 August 1730 at the tabernacle of the Basilica of San Francesco dei thieves they stole a silver pyx containing 351 consecrated hosts; the Particles were providentially found after just three days (August 17) in a box for alms in the Sanctuary of Santa Maria in Provenzano and reported in San Francesco with a solemn procession. Since then, despite the passage of time, they continue to remain intact and fresh, as evidenced by the regular examinations they undergo. The imposing structure of the Basilica also includes two large cloisters, a crypt which is now used as a university library, and the Oratory of San Bernardino.

Casa Santuario di Santa Caterina da Siena - It brings together various environments around the house of the Benincasa family.

The birthplace of Saint Catherine of Siena was transformed into a sanctuary in 1464 and here there are many testimonies relating to her life. Today the entrance is constituted by the Portico dei Comuni, built in 1941, two years after the proclamation as Patron Saint of Italy by Pope Pius XII. In 1999 Pope John Paul II also proclaimed her co-patron of Europe. The porch is so named because every Italian municipality contributed symbolically - with a brick - to its realization. And every year, on the occasion of the Feasts in honor of Santa Caterina (29 April), a Municipality of Italy or an Association offers the oil to fuel the flame of this bronze votive lamp, wanted by the mothers of fallen soldiers during the second world War. The Sanctuary House is composed of various rooms: the Church of the Crucifix (the work, on wood, from which the Saint received the stigmata in the Church of Santa Cristina in Pisa in 1375), the upper Oratory with a beautiful majolica floor, the Oratory of the Chamber frescoed in 1896 by Alessandro Franchi, and the Church of Santa Caterina in Fontebranda, with a wooden statue by Neroccio and paintings by Della Pacchia and Sodoma.

Collegiate Church of Santa Maria in Provenzano - Here is the Madonna of Provenzano to whom the Palio of 2 July is dedicated.

The Insigne Collegiata of Santa Maria in Provenzano (this is the full name) preserves on the high altar a terracotta bust of the Madonna venerated for a long list of miracles performed in the second half of the sixteenth century. The first was that relating to the episode of a Spanish soldier who, as a blasphemous joke, had aimed his arquebus at the sacred image. But the weapon, instead of exploding the blow, imploded and killed the soldier. The Palio of July 2 is dedicated to the Madonna of Provenzano: immediately after the victory, the Contrada members go to this Church with the drapery that was awarded to sing the traditional Te Deumdi thanksgiving to the Virgin. The church, consecrated in 1611, corresponds in style to the dictates established by the Council of Trent, both in its architectural aspect and in its liturgical structure.

The Basilica of San Clemente in Santa Maria dei Servi is located on the hill overlooking the Valdimontone, in the very heart of the district that bears its name, and is one of the points from which one can admire and photograph one of the most beautiful urban landscapes of Siena . Just as it is certainly a pleasure to sit on the steps leading to the church or stop in the garden which is located in a small adjacent square. The Basilica, consecrated in 1533 after more than a century of work, has a fifteenth-century facade never completed and a bell tower transformed at the beginning of the twentieth century. But the inhomogeneity of the styles, evident even from the inside (the last restoration dates back to 1926), does not detract from the charm and beauty of the Basilica dei Servi, inside which there is a work of the highest quality: the Madonna enthroned with the child of Coppo di Marcovaldo, a Florentine painter imprisoned after the battle of Montaperti in 1260, who according to tradition created this masterpiece as a ransom to be able to return to freedom. Among the numerous works in the Basilica, the Nativity of the Madonna by Rutilio Manetti from Siena (1625), the Massacre of the Innocents by Matteo di Giovanni (1491), the Banquet of Herod and the Ascension of Giovanni Evangelista by Piero Lorenzetti and school ( 1331-1335), the Adoration of the Shepherds by Taddeo di Bartolo (1404).

The apse with the large fresco The probative pool by Sebastiano Conca (restored in 2004) and the resurrected Christ in bronze on the altar, by Lorenzo di Pietro called Vecchietta, are the two most significant works of art of this church, born as a chapel of the Spedale Santa Maria della Scala and in fact incorporated within it, so as not to have a facade, nor the bell tower. The organ, the work of Giovanni di Maestro Antonio known as Piffaro, dates back to 1519 and is one of the first instruments of this kind, still in its original state.

The Oratory, built in the fifteenth century, is located in Piazza San Francesco, next to the Basilica of the same name, in one of the places where San Bernardino used to preach. The recent construction of the Diocesan Museum of Sacred Art has allowed the creation of a museum itinerary in which the artistic and spiritual evolution of the city is revived. On display are 13th and 14th century paintings, frescoes attributed to Ambrogio Lorenzetti, including the wonderful Madonna del Latte, some small plates by Sodoma and Riccio, the Cristo Portacroce del Beccafumi, as well as sculptures and goldsmith objects. At the center of the museum is the ancient rectangular hall of the Upper Oratory, decorated with frescoes representing the Stories of the Virgin, by Girolamo del Pacchia, Sodoma and Beccafumi.

The Church of Santa Maria Maddalena in Siena was built by the Augustinian nuns in 1539, after their original settlement, outside Porta Tufi, was demolished by order of the Municipality of Siena in 1526 for defense reasons: it was feared that it could be taken from the Florentines who were attacking Siena. The architectural project was entrusted to the architect Antonio Maria Lari called the Tozzo, but over the centuries the structure has been repeatedly modified and enriched with decorations; the baroque stuccos, made by the brothers Giovan Pietro and BartoloneoCremoni, belong to the first decades of the eighteenth century, clearly influenced by the works of Giuseppe Mazzuoli, while the facade was completely rebuilt in 1839 to a design by Agostino Fantastici according to neoclassical canons. The feeling that one has crossing the door is to enter a precious casket, in which the pictorial and sculptural decoration merge into a crescendo of lightness and splendor in which echoes coming from distant artistic cultures can be traced: Roman, Bolognese, Venetian. The stucco setting within which the canvases are placed are of great compositional mastery, with the invention of elongated architectural elements interspersed with figurative elements, a factor which on the one hand confirms the classical tradition as a starting point, on the other it opens new scenarios of experimentation, engaging and never banal. The allegorical figures that surmount the two side altars, in a rendering connected to the schemes of classical iconography but open to a movement and a lightness that find as a culmination the element of the angelic heads that, breaking the architectures, seem to hover towards the sky . The two holy water fonts, then, with the cloud and the angelic figures resting on them, are of great originality, thanks to the almost whirling movement of the draperies, the lightness of the natural elements, the sweetness of the figures.

The church of San Giorgio, in Via Pantaneto, is considered the most important eighteenth-century building in Siena. The large travertine façade, designed by the architect Pietro Cremoni, certainly stands out, with the coat of arms of cardinal Anton Felice Zondadari, promoter of the rebuilding of the church. Just as the bell tower is curious - visible only from the back of the church - with the 38 small windows opening on the four sides, which recall the number of the Sienese military comrades engaged in the victorious battle of Montaperti against the Florentines on 4 September 1260. But it is all inside the church, in the counter-façade, which hides a curiosity: it is the funeral monument to the painter Francesco Vanni, executed by his sons, with a particular technique of coloring marble, which was never revealed by the authors. And that therefore remains a secret. The canvas at the altar depicts Saint George and the dragon and is attributed to Sebastiano Conca.

Church of Santo Spirito - The church and the Pispini fountain give particular harmony to the square.

The church of Santo Spirito has fourteenth-century origins, but the current one was built in the sixteenth century by Dominican monks. The beautiful Renaissance portal (1519) has been attributed to Baldassarre Peruzzi, but there is no certainty about it. Of particular note are the frescoes by Sodoma in the Spagnoli chapel (the first on the right), the painted wooden statue of San Vincenzo Ferrer by Giacomo Cozzarelli. The seventeenth-century altarpiece Madonna and Saints is by Astolfo Petrazzi and on the pillars on the sides of the main altar there are San Domenico, Santa Caterina d'Alessandria, San Bernardino and Santa Caterina da Siena by Rutilio Manetti. there is a beautiful fresco from 1516 by Fra Paolino da Pistoia. The former convent adjacent to the church has been transformed into a prison. At the center of the square is the beautiful Fontana dei Pispini, from the mid-sixteenth century.